So, our most recent roadtrip took us from Las Vegas out to Long Beach. The shortest distance between two points might be a straight line, but there are very few straight roads out in the mountains and that’s no fun anyway. 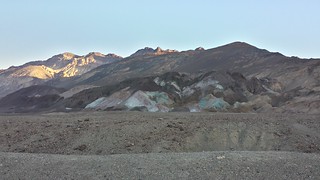 Now, since we were going to be out in small towns and the middle of nowhere, I looked into food ahead of time. Not a lot of vegetarian options. Even Las Vegas isn’t exactly hip to the concept of vegans yet — though they’re learning (we found a tiny pizza place with vegan cheese in a casino). And the guide book for Death Valley warned vegetarians to “B.Y.O.B. – bring your own beans.”

I can do that.

We stopped at a Target and picked up a small butane cookstove, some cheap metal spoons and forks (seriously, the 4 pack of each, total, was the same price as a box of disposable junk), flexi-cutting mats, dish soap, sponges, aluminum foil, aluminum pans, zippered plastic bags, small plastic containers, and a paring knife. (Everything but the aluminum pans and the butane canister came home with us in our checked bags.) Then we hit up Whole Foods for the following:

Later, at Von’s, I picked up a box of Minute Rice Medley (had wild rice, brown rice and quinoa in it). Minute rice, as opposed to regular rice, works best for camp cooking because “simmer” is hard on a butane or propane stove and it’s crazy to run a camp stove for 20-40 minutes trying to get rice to cook.

Meal 1 (Potato and Sausage)
Cooked at a picnic area in Valley of Fire State Park after a hike.

I sliced up the onion and potatoes on the mat. I cooked the onion in some coconut oil in one of the aluminum pans for a few minutes before adding the potatoes. I sliced up two of the four sausages into small bits and added those with a bit more oil and several hearty shakes of the Italian seasoning. Then I stirred it all up and covered it with foil. We talked and watched the sun slide down the sky while it cooked.

Meal 2 (Leftovers and Baked Beans)
Cooked at a picnic area outside Tonopah, NV.

We’d left the potato-sausage dish in the aluminum pan, but it was only half full, so we filled the other side with the box of baked beans and heated it all up.  We’d been hiking around the Tonopah Mining Park and eaten a small breakfast, so I also made some guacamole with the softer avocado and some salsa to eat with chips on the side. The single serving of leftovers went in a plastic storage container.

Meal 3 & 4 -& beyond (Tex-Mex & Italian Casseroles)
Cooked on the mini-wall around the hotel in Death Valley. 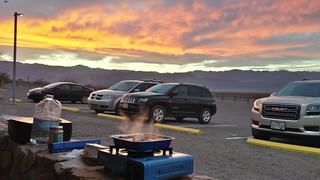 Pan 1: Oil, some of the onion and chopped tomato, sauteed.

Pan 2: Oil, some of the onion, and the yellow bell pepper, sauteed.

Pan 1: Dumped onto a paper plate. Added water and boiled. Added rice and Italian spices and cooked covered on low for about a minute. Then removed from heat, still covered, and put on the rock wall.

Pan 2: Dumped on another paper plate. Added water and boiled. Added rice and Mexican spices and cooked on low for about a minute. Then removed from heat, still covered, and put on rock wall.

Pan 1: Back on low heat, I added the other two Italian “sausages,” cut into small pieces and the contents of that first paper plate (the one with the tomato). Heated and stirred until the sausage was cooked. Recovered and put back on the wall.

Pan 2: Back on low heat, I added the two boxes of black beans (drained), the contents of the second paper plate (with the pepper), and some salsa. Heated and stirred for a couple of minutes. Recovered and put back on the wall.

Both were ready shortly after and yielded enough food to feed most of the people in the hotel. I had a burrito with the Tex-Mex mixture and some more avocado. We ate on this for several days (though the next hotel lacked the amenities of the Clown Motel (microwave), so I had to eat some of it cold.)