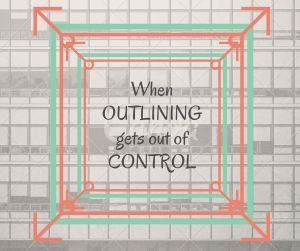 I’m not much for outlining. I try. I understand the concept. Except, then I write and everything goes off the rails. I write the end first, part of a prequel, thirty pages of backstory, and then the thing I outlined except with a different plot glued together from three other stories I wrote when this process happened on another project. The story, “Hollow” that appeared on Beat to a Pulp a few years back was a hybrid of three random scenes that came together after reading a magazine article and after two other plots fell out and got together to form their own thing — then those other two set a building on fire and haven’t been seen since, but I’m sure they’ll reappear at some point. The always do.

So, what I’m saying is that I’m painfully inefficient at crafting fiction. Something that seems to translate into “terrible writer” in this age of putting out five books a year in order to cobble together enough income, along with a day job and two night jobs, to live indoors someplace with plumbing. Trust me, I’d like to be a bit more organized and linear. And I’ve tried. I just keep ending up with stuff even I don’t want to read and stuff that’s utterly unfixable without dumping its parts back into the above stream of parts.

I wrote a whole novel-length manuscript this way. (And rewrote it approximately 57 times, five of which were from scratch. Seriously, there’s only about five words in common from the last draft to the first and three of those are “the,” “and,” and “a.”) Then, I wrote two more. A friend, who is way smarter than I’ll ever be, suggested I write more from the main characters’ childhood since they didn’t have a typical suburban upbringing. A couple of those have turned into stories at least one other person have read. And it’s true that the childhood misadventures of these characters can be entertaining, but that turns into a lot to keep track of. Hence, outlining the whole lives of these characters, from town to town, year to year.

Granted, that sounds crazy, but I’ve tried doing things (not writing, clearly) the “right way” and that’s never worked out.

I find the characters interesting, though, and with well plotted lives, maybe someone else will find them interesting. Maybe. Maybe not. Probably not. Seems selling a book these days involves some strange alchemy beyond interesting or even well-written, beyond even luck, and might actually require black magic or complicated sacrifices. Pretty sure it also requires something more commercially easy to explain than this Winchester Mystery House of fiction I’ve created on my hard drive.

Sure, there are different options. There’s stabbing blindly at traditional routes, writing things that are supposedly popular or formulaic or manage to predict trends before they happen. There’s the crossroads of indie presses with less-popular, less formulaic books that rise and fall and sometimes rise again. And self-publishing, which is often either done poorly or expensively and there’s not much going on in between. (Yes, to me the $2000-5000 it seems to cost to put out a good-quality self-pubbed book seems expensive because a nearby town is looking to hire an attorney for $54,000 a year and before the economy collapsed, I made that teaching and my last year of teaching my salary worked out to be about $10 an hour for all the time I put in.)

Best I can figure, all writing advice contradicts itself and career/industry advise is no different. A lot of it is dated because things are moving at such a speed that Joe Friendly who got an agent five years ago, a deal two years ago, and just released his debut had a vastly different playing field to work with than you likely will. Just like the advise our parents, teachers, and grandparents gave us in business and life ten, twenty years ago might as well have been written on stone tablets  or at the very least come off as dated as instructions for a transistor radio. Sometimes it still works. Sometimes not.

And everyone has a theory about why.