I’ve been, for months, slowly working my way through Muriel Ruckeyser’s The Life of Poetry. It’s been slow going for a few reasons. One, I had a “stack” of books to review. Two, I started a couple of GIS classes. Three, the other books in the rotation of randomly-placed reads. And lastly, because it keeps making me cry. 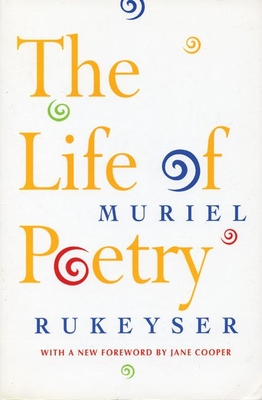 This is part of a section I read last night:

“In Denmark, during the last war, the Jews were required by edict to war the yellow Star of David which would mark them and set them apart. On the first day of the edict’s validity, nobody appeared in the street without the yellow badge. In a great simple act of love and identification, the Danish people had canceled the power of a ruling that, without the acceptance of the majority, could not force any group apart from the rest of the people.

“And in fascist Germany, one first-rate poet stayed. He was rumored by the exiles to be one thing and another He was a man of good will, a doctor, and a poet, who had written, all his life, against war and against the masks of evil, saying, “God give us each his sin to awaken him!” Now he was writing the poems of the newborn, and myths of many returnings, of the pure coming home, stronger, more beautiful than before, after destruction. He was reading publicly, to the Hitler Youth; and a storm of hatred arose from his old friends. He did accept, it was true, the invitations that others refused in pride. He did go and read, to packed meetings; and what he said in his defense was “I cannot withhold my gentle voice.” He was against them, and they wanted him. The seemed to wan what he had to say. The offering of his parables, his gentleness that allowed him to give these words of renewal and peace to whomever asked of him — they are part of a gesture which, I believe, reaches softly and graciously to the imagination.

“These gestures speak to many lives. They give hope and impetus to many kinds of people.

“They are infinitely multiplied. You will know those who risked themselves and died in the Resistance movements of many lands; little children, who in a far-reaching moment of consciousness, made their gifts; miners, anonymous women, those suffering and poor, and the privileged of all functions in life, those gifted with insight so that they understand the beauty of unconditional love, and live and make their gifts. The gestures of the individuals are not history; but they are the images of history.”

(From The Life of Poetry by Muriel Rukeyser, 1996 edition)