We woke up at the Wigwam Motel in Holbrook, AZ. I have to admit that I love the Wigwam Motel and I have since before I stayed there the first time back in 2001. It’s kitschy and historical and small and inexpensive and clean and surrounded by antique cars — it checks off so many things on ideal-place-to-stay list. Yes, I realize a lot of people want room service or an infinity pool or a fitness room and all that’s great for a resort or a conference hotel, but road trip? I’m all about the cheap, cool spots. 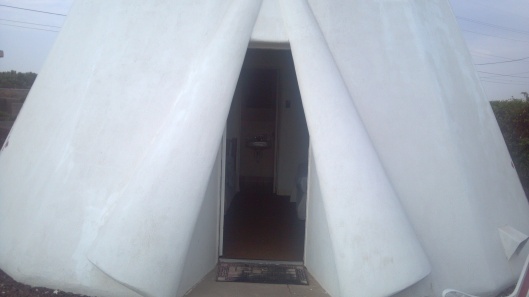 The Wigwam Motel and Historic 66 and all the accompanying stuff are about 18 miles or a half hour drive from the Petrified Forest National Park. The northern end of the Petrified Forest starts the Painted Desert and part of it is included in the park (or a separate but attached wilderness area, if you want to get technical). I think most people come into the park(s) from the northern end through the Painted Desert Visitor Center. It has the restaurant, the bigger visitor area, gift shops. The entry lanes are bigger, too, and it’s closest to the interstate. I have to recommend, though, if you can come in from the southern end of the park in the morning, it’s pretty great.

I’m not a fan of big crowds and the southern end is less crowded so you get the chance to walk among the large petrified logs with fewer people, explore a little more. And as you pass through the Badlands and on to the Painted Desert, you get some incredible, almost surprise, vistas. 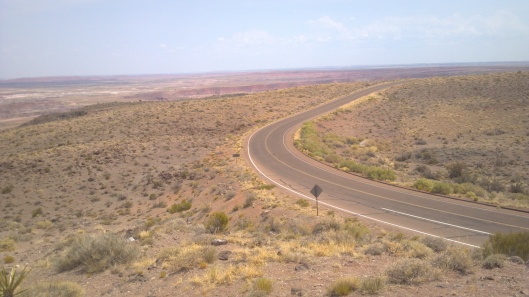 Plus, if you’ve stayed in Holbrook the night before, you can have a late lunch in the restaurant on the northern end after your exploring. Or, at least that’s what we ended up doing. For the record, not a lot of vegetarian options, but everyone recommends the Navajo Taco, which you can get without meat or cheese. That basically turns it into an iceberg and tomato salad on Navajo bread but the bread is filling enough. (And fattening aplenty!)

Recipe for Navajo Fry Bread, which evolved out of the mid-1800s when about 8000 Navajo were basically held prisoner at Fort Sumner, NM with little more than flour and lard to eat. It’s considered disrespectful to turn down fry bread if it’s offered to you by a traditional family.

Mix up everything but the oil until the dough is “fluffy.” Put the oil in a skillet and heat until a pinch of dropped dough floats instead of sinking. Flatten out balls of dough (think fair food elephant ears) and fry until golden.

Back out on the road, we headed for Winslow, AZ. Winslow’s claim to fame is that certain Eagles’ song. I’ve heard that song like every good Southern Girl who’s ever been to any event mixing their “butt rock” (friend’s term for Southern Rock, 70s quasi-folk bands, and early pop-y hair bands) with country (the pre-Garth Brooks kind). The lyric just never resonated with me in the Eagles’ song. No, all my Winslow associations come courtesy of Tori Amos being “in the wrong song.” (Yes, I totally made the husband listen to a CD with “Springtime of His Voodoo” on it a few dozen times between Holbrook and Winslow. And, yes, now I’ve guaranteed none of you will want to road trip with me.)

Standin' on a corner…

There’s also a really cool old couple of train cars in a park a few blocks from “The Corner” if you have time to poke around town.

From Winslow, we headed west to the Grand Canyon. Now, unlike Episode 3‘s trip from Van Horn to Santa Rosa, which Google had estimated taking just over 8 hours, including a detour we didn’t take, or Episode 4‘s batshit drive time of an estimated 11.5 hours, not including the absurd detours, the trip from Holbrook, through the Petrified Forest and up to the Grand Canyon via Highways 89 and 64 (East Rim Drive), was only supposed to take about five hours. Note, when planning a road trip, don’t plan to drive more than five hours a day unless you’re a long-haul trucker who plans to see the sites while peeing in a bottle at 70mph.

Five hours was even reasonable enough that we pulled over at Sunset Crater and took some pictures, stretched our legs, that sort of thing. Imagine! And it would still be daylight when we got to our destination!

Well, sort of. Note the storm clouds in that second picture up there. The first time I saw the Grand Canyon was in 2001 and I was on a road trip with a friend who might have at some point in Pinetop-Lakeside, AZ decided that I was as insane as my husband decided around Santa Rosa and certainly knew by the time we drove through a canyon on Indian Service Rte 9 southwest of Pueblo Pintado at dusk.

Along the comparably smaller canyon on Hwy 89, there are usually stalls with vendors selling food and jewelry, but the weather was so bad none of them were really staffed. Driving along East Rim, the view was amazing, but by the time we got to the visitor center it was drizzling rain and cold. (Summer doesn’t find the Grand Canyon quite the same way it finds Fort Lauderdale or Van Horn.)

First view of the Grand Canyon.

At the next overlook, we stopped and too photos, explored a little and got back to the rental car as it started thundering. At which point we discussed our sleeping options for the night since we had a campsite booked at Mather Campground and, it being early July, every hotel room was booked in Grand Canyon Village, Tusayan, Williams, probably even Flagstaff. Not good. Especially after the crazy drive the day before. We wanted to get somewhere and eat and get a good night’s sleep.

About an hour before sunset. #grandcanyon

We decided to drive into Grand Canyon Village and play it by ear and by the time we got into the Village the weather was clearing so we headed over to the campground to check out the situation. Now, if you remember me saying how early I booked our site at Santa Rosa in Episode 2, you should guess I booked the campsite at Mather about eight months before the trip. When I booked, I had a pretty good choice of spaces and I’d picked on near a restroom and not too far from the showers at the entrance to the campground. When we got there, the place was booked solid. Full. I don’t mean full in a small campground kind of way. I mean, full in that the number residents of Mather on any given summer night might be higher than the population of the town I grew up in. Score on my spot picking. 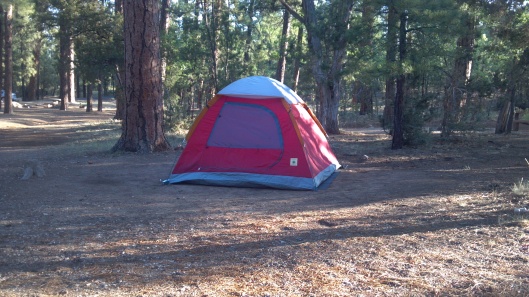 We cooked some dinner, relaxed, and talked about driving back over to the rim to check it out, but ultimately decided we’d sat on the rim at night and listened to the wildlife and seen the bats and as awesome as that was, we were exhausted. Plus, Mather isn’t terribly close to a good overlook unless you’re in the mood to drive or really put in a long walk.