My last few posts have been a bit cynical and maudlin because I’ve been in a funk for months that I’ve been having trouble shaking. I’m trying. Still trying. Always trying. 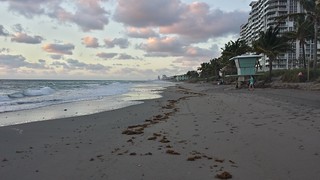 Talks in Paris continue over what leaders think they can do about climate change, what they can agree to without upsetting their supporters, etc. And while many mean well, talk is cheap, and even treaties and laws are only worth anything if enforced. While they debate, places like Newtok are becoming Atlantis even as many of our own politicians and Presidential candidates debate whether climate change is real. Closer to home, cities like Miami Beach have been combating the inevitable with plans to raise roads, install pumps, add on to sea walls, and potentially abandon the lower floors of buildings while the equally-susceptible Fort Lauderdale (the “Venice of America” with hundreds of canals and low spots) appears to be hoping it’s just a fad. Then, Fort Lauderdale doesn’t have the tax base Miami Beach does. Most of Florida doesn’t, which means there’s little many towns can do besides watch beaches and buildings disappear.

Climate change alone isn’t our only problem and while the husband uses GIS to help plan for the coast’s future, my sister’s been fighting pollution from solid wastes. A longtime advocate of beach cleanups, she’s spent more than a decade educating, organizing, and recycling for her county up in North Carolina.

Lately, her big passion has become plastics pollution, especially in our oceans — something even people inland need to be concerned with both as causes (plastic microbeads in cosmetics as well as trash blown or dropped in lakes, streams and rivers end up floating downstream or discharged into our oceans) and as recipients (plastics end up in the food supply. Birds and fish full of plastics end up either dying — sometimes in numbers greater than they can sustain — or eaten by larger prey that may eventually be eaten by humans (or eaten by something that is).

One of her most recent campaigns has been against single-use plastic straws. Her fellow eco-warriors have set up a program allowing establishments to become certified ocean friendly by only serving plastic straws upon request (or switching to paper straws). If you don’t need a straw for medical reasons, try saying no to the straw and help make our oceans a little happier. (You can also buy reusable straws if you find you really like or need to have one, but aren’t crazy about them ending up in our waterways.

This month, though, my sister is part of the Pangea Exploration trip from Brazil to Guyana to research and education plastic and waste reduction. Back at home, she’s a big supporter of ProjectAware, the NC Marine Debris Symposium, the organizer for Earth and Surf Fest, and hundreds of Beach Sweeps. She’s the overachiever in the family.

If you want to know more about Lisa’s passions and campaigns, check out her blog, Coastinista (unlikely to be updated while she’s at sea). If you think it might be cool to track the Sea Dragon, you can do that here. Results from the water sampling done on board can be found here.

She’ll be celebrating her birthday at sea this year, but since she loves diving, oceans, and environmental causes, I’m sure it’ll be the best one yet. (Neither of us ever got a pony.) You can wish her happy birthday next week on Twitter if you want. (Again, she won’t see it until she reaches land.) And if you find yourself near the water, download the Marine Debris Tracker app and help us keep our waterways cleaner.

Below are some photos from her trip so far (everything below is hers unless otherwise stated):