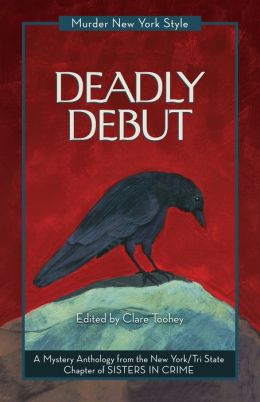 DEADLY DEBUT is an anthology of short stories written by some terribly murderous residents of NY. You should, honestly, just pick it up because it’s seven stories by great writers for less than three bucks. That’s less than most of the coffee drinks at Starbucks and will keep you entertained longer than finish one-seven venti-mocha-frappa-soy-latte-whipped whatevers depending on how fast you read/drink.

Just in case there’s even one of you out there thinking “Two-ninety-nine?! That’s too much to pay for a book! Only seven stories! Ha! Never!”…let me just start with, “Don’t say those things out loud, please. Especially while you’re holding a six-dollar coffee. Art takes time and energy to create — far longer than that beverage — so treat it well.” Beyond that, let’s break this down and consider that 2.99 divided by seven is just under 43 cents a story. Now, imagine the author in front of you, offering to entertain you for a few pages, to tell you a story of a little kid’s lie that left a lasting, life-long weight or about a dutiful daughter who uses her P.I. skills to help out her dad’s friend or a just-sober guy who finds a body in his closet only to have it disappear before he can figure out what to do about it. Now, realize that if you’re like me you haven’t even seen vending machine soda for fifty cents in years, much less forty-three. Isn’t it worth 42.7 cents to find out who murdered the belly dancer in the locked room? Or who stole the test out from under the flustered newish professor’s nose? Or how Edgar Allan Poe managed to kill a boy in 1961?

Besides, somewhere in these pages is the only other female Davis I know of besides the one in my own fiction, so go make with the clicky and find her. (She’s just as tough, but far less damaged than mine.)